The IP Dust and Waterproof Rating System for Two-Way Radios 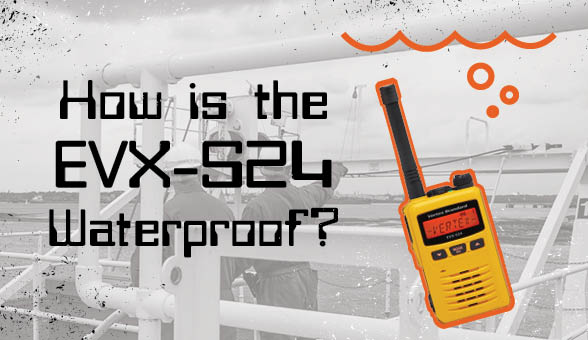 Vertex’s new EVX-S24 two-way radio has a waterproof rating of IP-67, but what do the numbers mean? Where does the rating come from? And what does it mean for you?

What do the numbers mean?

IP stands for International Protection Rating, but it is often referred to as Ingress Protection Rating. Following the letters, IP, are usually two numbers. These numbers represent the rating of protection from both a solid and liquid stand point. The first digit represents the rating for solids, and the second digit represents the rating for liquids. These ratings reflect the levels of effectiveness in the sealing of the electrical enclosures of the device from substances such as dust and water.

To use the IP Rating system, one must first understand what each number represents. The first digit (solids) ranges from a rate of 0 to 6. A rating of 0 would represent no protection at all, while a rating of 6 would represent complete protection from dust and other smaller particles.

The second digit (liquids) ranges from 0 to 8. A rating of 0 would, again, be considered no protection, while a rating of 8 would mean the device can be completely submerged in more than 1 meter of water for an extended amount of time and still work.

Basically, the higher the rating, the better the protection.

So the EVX-S24 has a rating of IP-67 (as shown in the chart below), making it one of the best products to purchase when wanting a durable, waterproof two-way radio.

Where does the rating come from?

The IP rating system was developed by the International Electrotechnical Commission , or the IEC. The IEC is a non-profit, non-governmental international standards organization that was formed in Switzerland in 1906. The commission is made up of electrical engineers and academic and industrial experts. It is the world’s leading electrotechnology standards organization with currently 82 countries participating in their program.

What does it mean for you?

The IP Rating system is very important when understanding the safety of not only the device but of the people using the device as well. These ratings help to understand the abilities and restrictions of your device. For example, the EVX-S24 has a rating of IP-67, which means it is dustproof and can be submerged in up to one meter of water and still operate. However, if a device had a low rating, such as IP-11, you would need to be aware that objects, such as a child’s fingers, could get into the device, and that there is very little protection from water.

For more information on the IEC and the IP Ratings, visit www.iec.ch